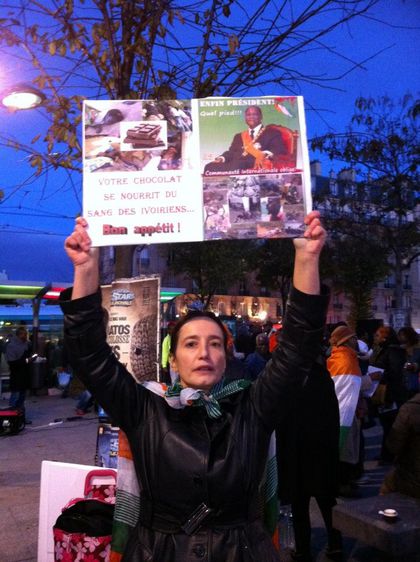 The Ivorian Popular Front (FPI) and the Ivorian resistance movement, comprised of numerous NGOs, will hold a demonstration in Rome protesting the arrest and detainment of ousted Ivorian President Laurent Gbagbo, held and awaiting trial by the International Criminal Court in the Hague since November 2011, as Ivory Coast President Alassane Ouattara arrives in the Italian capital to be recieved by the pontiff.

Since April 2011 there is a severely deteriorating political and security situation throughout the country, concentrated in the western part of Côte d’Ivoire where there is a full-out genocide, targeting the Wê ethnic group.

After contested elections in December 2010 President Laurent Gbagbo called for a ballot recount. Instead of this peaceful option to overcome the post-electora crisis, a French-UN coup d’etat followed, according to anthropologist and political scientist Michel Galy, and Alassane Ouattara was subsequently sworn is as the new President, breaching the Ivorian constitution.

Nineteen months following the tumultous turnover, the ‘Dialogue, Truth and Reconciliation Commission’ established by Ouattara in May 2011 to shed light on the post-electoral crisis (the four-month period that ensued with a double presidency) has still taken no concrete steps to effectively bring peace and security to the people.

Until now, the Ivory Coast has failed to meet the November 12 deadline to submit voluntary human rights pledges required for entry to the UN Human Rights Council. There is no effective political will to monitor the countrys human rights violations, say opposition groups.

A system of predation and racketeering, essentially carried out by the Republican Forces of Côte d’Ivoire, (FRCI), the national army, is weakening the official structures of the state security. The country’s police is unarmed to protect the population. A recent Amnesty report denouces a « situation of lawlessness » even in Abidjan, the country’s capital.

The FPI said in an open statement that, despite embracing non-violence, it has been unable to exercise its function as an opposition party. On August 18, the headquarters of the FPI was looted and Dr. Alphonse Douati, Deputy Secretary General of the FPI, was arrested and imprisoned by the FRCI, the national army. A week later, on August 26, the FPI Secretary-General's Spokesman Laurent Akoun suffered the same fate. They join the more than 200 political prisoners in illegal detention and facing torture today. There are many places of unrecognized detention. Some have been held for many months and denied contact with their families and access to lawyers, according to Amnesty International. Independant sources say the number of political detainees is as high as 1,000. The party is severely put to the test with 23 ministers and six former ambassadors in exile, 4 Ministers in prison, and two others dead, FPI leaders protest.

The Ivorian Popular Youth Front movement (JFPI) was prohibited last month from holding a demonstation at the Notre Dame du Plateau catholic church in Abidjan, although the Church authorities had approved the sit-in. The JFPI intended to denounce a reported 400 abductions, 360-380 arrests and four murders in Abidjan alone. One of the country’s main trade union leaders, Mahan Gahe Bazile, has not been released from prison despite repeated requests from the International Trade Union Confederation (ITUC).

Press freedom is also suffering. To date at least 26 journalists have fled into exile and do not feel free to return due to lack of safety. The opposition press has organized so-called “Journaux Presse Morte” , “Death Press Days” to protest the persistant intimidation and arrest of journalists, as well as the pillage, looting and military surveillance of their offices – one of which was occupied for six months by soldiers.

According to UNHCR data, currently there are still 40,000-80,000 internally displaced persons (IDPs) and 80,000 refugees outside the country.

Amnesty International says, “There is a need to address the continued human rights, assistance and protection needs of internally displaced persons (IDPs) in Ivory Coast particularly in the west of the country.” Some displaced communities and returnees continue to hide in the forest at night due to fears of attacks. Even camps for IDPs have been attached and civillians forced to hide in the forest seeking security. Mass graves are being uncovered.

Natural resources are also at risk, says a recent UN Panel of Experts Report, which cites a continuing unsustainable untaxed economy based on their exploitation.

Local and international Ivorian media complains of a black out and worse still a manipulaton of information in Côte d’Ivoire, slandering and demonizing Laurent Gbagbo and his supporters. Laurent Gbagbo came to power in 2000 and the first law he passed guaranteed free health care (AMU) for all the citizens of Côte d'Ivoire. His vision for a democratic and socialist development in West Africa has been discredited. Two examples of the disinformation campaign: Le Monde newspaper was sentenced by a French court for libel in 2006 when it wrote "Gbagbo and his death squads," a serious charge that was unfounded. The United Nations declared in February 2011 that Gbagbo had violated the arms embargo buying arms from Belarus. The serious charge was withdrawn by the United Nations a few days later, when Belarus complained the fact was not true.

Demonstrators coming to Rome hope to bring attention to the unsustainable situation since Ouattara came to power in April 2011, as well as the insecurity brought to the country through the pro-Ouattara rebellion which effectively cut the country in half since 2002. The plight of the Ivorian people needs to be urgently addressed as democracy and the construction of a national state is receding daily. Although Ouattara may make the effort to free some political prisoners ahead of his official visit to Italy, in the light of the history of the last ten years its a large part of the FPI political party, its supporters and its leader, Laurent Gbagbo which need to be set free. Instead Alassane Ouattara and Guillaume Soro, the current president of the National Assembly- responsible for the death of thousands of civilians, among which the Duékoué massacre, where the International Commitee of the Red Cross (ICRC) has confirmed the killing of 800 civilians in just one day, on the 29 march 2011- should be sent to the International Criminal Court in the Hague.